Kodak Professional XTOL Film Developer, parts A & B to make 5 Liters, is eco-friendlier containing no hydroquinone.

Xtol is one of the few developers that do not contain hydroquinone. It uses derivatives of ascorbic acid (vitamin C) and phenidone as developing agents. Claimed advantages include low toxicity (important for environmental reasons as well as occupational safety) and an unusual combination of fine grain with high film speed.

Unlike many powders, XTOL can be mixed at room temperature making it ready to be used quickly while having a long and happy shelf life.

The Brownie Camera Guy says:
Many people swear by XTOL because it is less toxic than most other film developers. Additionally, mixing can happen at room temperature. 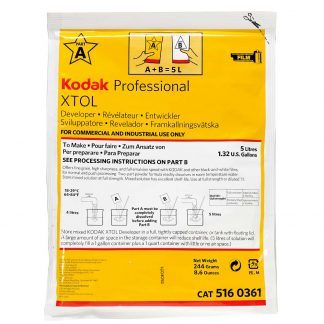