This package of Bergger BER49 Photographic Film Developer will make 5 liters of stock solution and 10 liters of working solution.

BER49 is recommended with both traditionnal and modern tabular grain films. Outstanding results are obtained when processing Bergger’s BRF 400 and PANCRO 400 films.

BER49 works without regeneration. In normal dilution, 10x 35mm or 120 films can be developed by a liter of working solution. NOTE: But starting from the third film, developing time has to be increased by one minute, for each film.

The working solution has a long shelf life, and is very resistant to oxidation.

It is an excellent go-to developer for traditional grain films like Tri-X and HP5+ along with tabular grain films such as TMax or Delta films. 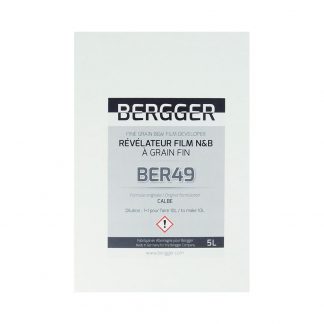