Foma Fomadon LQN Film Developer is known as the original “Magic Water” for Foma 100 and 400 ISO films and produces excellent results with any B&W negative film.

Fomadon LQN gives a full ISO rating with normal image contrast, nice gray tones and a “traditional” image feel. This is a highly-compensating developer and gives a softer negative contrast. LQN is the standard go-to developer when you want to process Foma 100 film at true 100 ISO or 400 film at true 400. Foma Fomadon LQN Film Developer is not as fine-grained as the Atomal-49 developer, but is much easier to work with. 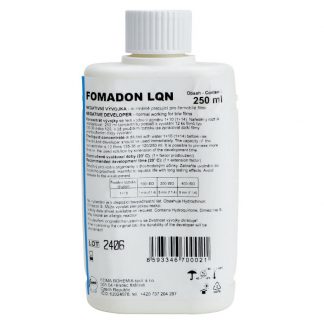