The 3D printed spools used are designed by Chuck of BCG printed right here in the shop.

Kodak Professional Tri-X 400 Black & White 620 Roll Film is a classic high-speed panchromatic film designed for a wide array of shooting conditions. Characterized by its fine grain quality, notable edge sharpness, and high resolving power, Tri-X 400 also exhibits a wide exposure latitude with consistent tonality. It has a nominal sensitivity of ISO 400/27° when developed in standard black and white chemistry, and responds well to push processing. As an all-around, highly versatile film, Tri-X 400 is a standard choice for photographing in difficult lighting conditions as well as when working with subjects requiring good depth of field or for faster shutter speeds. 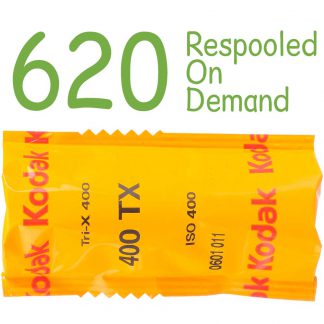