Kodak Professional TMax 100 Black & White 35mm Film – 36 Exposures is a medium-speed panchromatic black and white negative film characterized by an extremely fine grain structure along with high sharpness and resolving power. By utilizing a T-Grain emulsion, the grain pattern resembles a patterned, tabular form that maintains effective film speed while reducing the appearance of grain during enlarging or scanning. This film has a nominal sensitivity of ISO 100/21° and also features a wide exposure latitude, broad tonal range, and responds well to push development and zone system development changes.

In addition to processing as a negative in standard black and white chemistry, T-Max 100 is also suitable for reversal processing using the T-Max 100 Direct Positive Film Developing Outfit for creating copy and duplicate work. 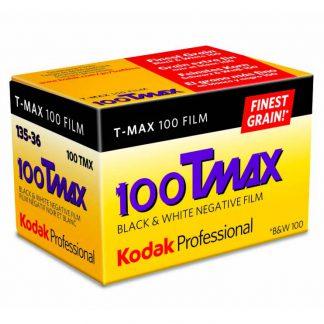