Film Washi Leader is needed for the processing of Film Washi’s V and W hand-coated paper film using a classic processing tanks and reels, such as Paterson, Jobo and AP. These films can also be processed by a careful dip and dunk.

Film Washi Leader for Processing”V” and “W” 35mm Film is needed for the processing of Film Washi’s V and W hand-coated paper 35mm film using a classic processing tanks and reels, such as Paterson, Jobo and AP.
The principle of this operation is to load the film together with this leader which will guide it onto your developing reel and also protect the film from touching itself during processing.

How to use the leader:
You’ll need a processing reel and tank, this blank plastic leader film and adhesive tape.
This operation must be done in complete darkness for V films but can be done under red light for W films. Tape the end of your film onto the end of the leader stripe. You must position the leader underneath with the film emulsion facing upwards. Insert it inside the reel’s core. In doing so, please ensure the emulsion side is placed inwards and the leader stripe outwards. Load the film as usual but slowly and with extra care.- once you reach the other end of your film, tape it on the leader and finish loading then close the tank as usual. 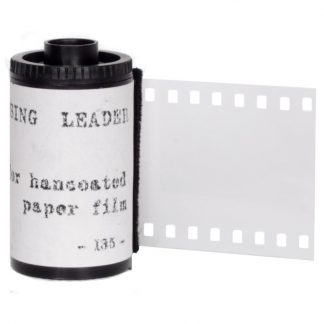