Bergger SUPERFINE is a very special film developer producing ultra fine grain while decreasing the film speed by one stop.

Bergger SUPERFINE film developer allows the whole dynamic of the film to be used, resulting in an extremely wide range of grey, combined with an ultrafine grain. Bergger SUPERFINE works in the deep layers of the emulsion, perfectly developing the high lights without burning them, combined with very detailed shadows. The only condition is to overexpose the film. Generally, the developer decreases film speed by one stop, and is well adapted to all films with sensitivities between 25 and 200 ISO.

SUPERFINE has an extremely long shelf-life and can be used for 9 months after opening. It is very important to shake the developer vigorously before diluting it. The substances contained in the developer tend to concentrate in the bottom of the bottle over time.

It is recommended to pre-soak the film for at least five minutes in water. The development temperature is 24°C ± 0.5°C, and the temperature must be maintained. 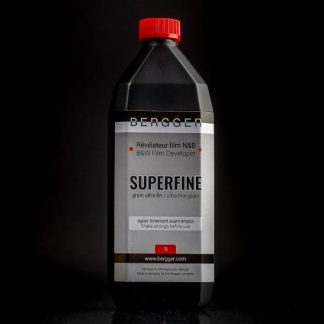