This acutance enhancing film developer does not get more Rodinal than this, unless you are using Rodinal. Adox works together with former Agfa scientists on all Agfa-replacement products. If you have used Rodinal before you can achieve identical results with Adonal.

This bottle of 100 ml concentrate can be used diluted from a recommended 1:25 up to 1:100 with some applications up to 1:500. The recommended 1:50 dilution produces crisp negatives of normal contrast with slightly more obvious grain than standard fine-grain developers.

Adonal is famous for its contrast manipulation controlled with dilution.

Adonal is a one shot developer and can not be re-used.

One of Adonal’s undoubted attributes is its incredible shelf life, with half-opened bottles reported to last over 40 years. The solution is light straw colored when first opened, and during the course of a year turns darker until eventually becoming deep purple-brown. Don’t be fooled into throwing it out! Adonal continues to perform perfectly regardless of the color of the solution, and is the ideal product to keep on your shelf if you often find your usual developer is exhausted.

The Brownie Camera Guy says:
I have a bottle of Adonal, ready to use, in my darkroom refrigerator at all times. It never seems to go bad, even an open bottle develops as expected after being years old. It is a versatile go-to film developer that will develop any panchromatic film. Great for old film found in cameras! 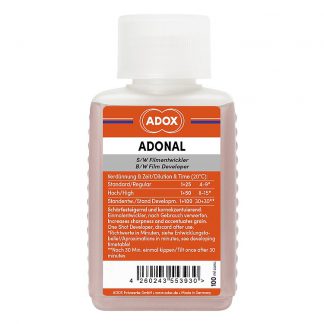