Spur Ultra R 800 35mm Film is rated ISO 50 and is an orthopanchromatic high resolution document film. It creates high contrast negatives. The contrast can be controlled by the developer used.

SPUR Nanotech UR is a high speed and push developer for the highest Resolution films SPUR Ultra R 800 and ADOX CMS 20 II. Nanotech UR generates fine tonality with these high-contrast and highest-resolution films. 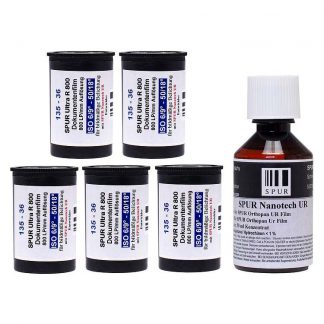