No film is sharper, has finer grain or higher resolution (up to 800 L / mm at highest contrast) than Adox CMS 20 II.

Nearly grain-free enlargements can be made up to an image size of 2.5 meter diagonal. This is roughly equivalent to a 500 megapixel resolution. For comparison: a 12 Megapixel digital camera has only 2,4% as much resolution as this film!

Cubic silver grains, which are coated in a single, finest-grain, ultra-thin layer. The AHU anti-halation layer between the emulsion and film base guarantees the film sharpness.

ADOTECH III developer brings the perfect gray scales to this otherwise very hard-contrast film material and will give you images with such incredible detail that no one will believe that they were shot on 35mm film.

In a normal developer, the light sensitivity climbs to 80 ASA and the contrast becomes ultra-hard. When so developed, the film can be used as a document film. 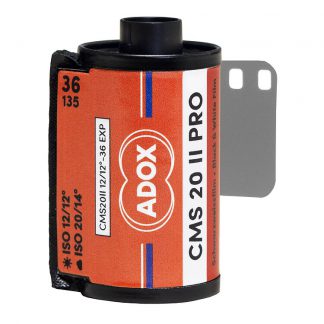