This is a roll of Kodak TMax 400 Black & White 620 film respooled by hand using fresh film…on demand…after you order it.

Kodak Professional TMax 400 Black & White Roll Film is a high-speed panchromatic black and white negative film featuring a unique T-Grain emulsion to provide a very fine grain structure with a high degree of sharpness and edge detail. It has a nominal sensitivity of ISO 400/27° along with a wide exposure latitude for rating the film up to EI 1600 and push developing. Its versatility benefits working in difficult lighting conditions and with moving subjects, and its fine grain profile, broad tonal range, and high resolving power benefit scanning and enlarging applications. Additionally, the film is well-suited to scientific and biomedical work, especially when fluorescence in photography is required.

The Brownie Camera Guy says:
This is among the finest grain films that I ever used. This, and TMax 100, were the only black & white films that I used professionally when sharpness, tone and clarity were absolutely essential. Though it can be processed successfully in just about any developer, the film’s T-Grain shines when processed in TMax developer. This is still one of my regular films to use when ultra-fine grain is called for. 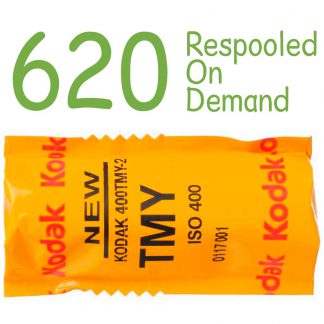