Fujifilm Neopan Acros 100II is ultra-high-quality black-and-white film. This is a 35mm roll of 36 exposures.

Many analog enthusiasts were deeply disappointed when Fujifilm announced in 2018 that it would stop the production of its beloved black-and-white film, Neopan Acros 100. However, it surprised again with the announcement of the relaunch of Acros 100 in November 2019. The film now officially goes through life as Neopan Acros 100 II and is almost identical to its predecessor. According to Fujifilm, it had become almost impossible to produce the original Acros black-and-white film since the raw materials on which the film was based had become difficult to obtain and the production was no longer adapted to today’s smaller demand. The emulsion of Acros 100 II was therefore redesigned to meet today’s challenges without compromising the character of this beautiful black-and-white film. Check Emulsive for a first comparison between the two versions!

Fujifilm Neopan Acros II is an ultra-high-quality black-and-white film with nominal sensitivity of ISO 100, with the world’s highest level of granularity, three-dimensional tone reproduction and excellent sharpness. It is suitable for shooting in a wide range of fields, such as product photos and architecture photos, as well as long-exposure celestial and night-shot photographs.

Compared to the original Neopan Acros 100, the gradation of the highlight part is designed to be sharper and three-dimensional gradation reproduction is possible.

The world’s highest level of sharpness enables depiction that emphasizes the contour of the subject. 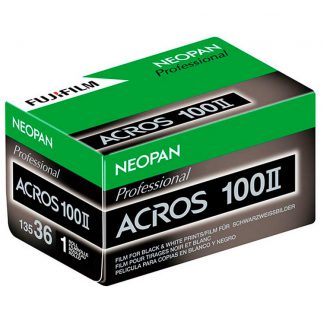