Bellini D96 is designed specifically for the development of motion picture films. It produces a very unique tonal range with contrast that is controllable. Shelf life is very long. No mixing is needed, use full-strength from the bottle.

Bellini D96 is designed specifically for the development of motion picture film stocks, such as the gorgeous Kodak Double-X, Orwo UN54 etc. Works great for other films too!

D96 is a low contrast developer with contrast control achieved by development time. Vacuum sealed it has a long shelf life and can be used over and over until you see signs of a fall in contrast. By compensating with increased developing times it can last even longer, you decide when it’s had enough!

All in all a very economical developer. If you love Double-X, this is a must try developer. According to Ferrania, D96 is the best developer for their P30 film! 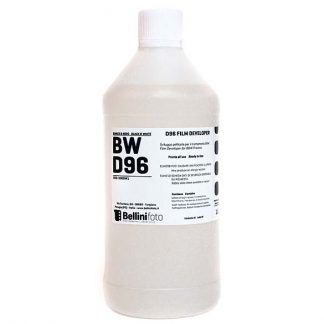