This film is made of two emulsions coated in a single layer on an archival clear PET 100 micron base, resulting in very large exposure latitude. CHS 100 II responds very well to pull- and push-processing.

In 35mm format ADOX CHS100 II has two anti-halation layers (between the emulsion and the base, and on the backside), making it very sharp. The backside AH layer also diminishes curling and reduces the light-piping effect. This effect of light penetrating through the base into the cartridge is immanent to all polyester-based films and cannot be fully prevented. CHS 100 II should be protected from bright light which can fog the first few frames. It is best to be loaded in the shadow or subdued light.

CHS 100 II sharpness and contrast can be managed with various developers: velvety soft results in Atomal, balanced contrast and optimal sharpness in FX-39 and elevated contrast with extra high definition in Adonal/Rodinal. Tanning developers are not recommended. 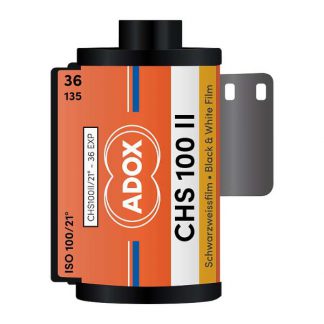