Start processing film with this Fotoimpex Film Processing Starter Kit. Develop 10 rolls of film with the chemistry in this kit!

If you’ve been wanting to try film developing then this kit is a great way to get your hands wet! The Fotoimpex Film Processing Starter Kit contains all you need to develop your first black & white film.

The kit includes a Film Developing Tank with two reels, thermometer, 25 ml measuring cylinder, 100 ml of Adox Adonal film developer, 100 ml of Adox Adofix Fixer, 50 ml of Adox Adoflo wetting agent and some exposed film in order to practice the film spooling process. The materials supplied are not some cheap knockoffs for this kit but are intended to be used well after your first few developing sessions.

Paterson Film Developing Tanks are constructed from high-impact polystyrene that stands up to high volume use. This tank has no hidden parts, and is always easy to keep clean. The Super System 4 Tanks are durable, easy to use, and provide acconsistent and even film development. It features a unique snap-in light trapping funnel for quick filling and emptying, to ensure even development and precise processing times. The Super System 4 Tank offers a choice of agitation methods; use inversion agitation, rotary agitation with the removable agitator rod supplied or a combination of both.

The thoughtful design of Super System 4 includes a funnel which locks in place to keep reels secure. And, as an extra safety feature, the cap cannot be locked if the funnel is improperly seated Chemicals can pour without splash and solution quantities are permanently indicated on the bottom of every tank. All Super System 4 parts are interchangeable. The Super System 4 is simpler to load, faster to fill and easier to clean than any other tank.

Adox Adonal Film Developer is produced according to Agfa Leverkusen´s latest Rodinal formula from 2004. This developer is great for just about any black & white film. The recommended 1:25-1:50 dilution produces crisp negatives of normal contrast with slightly more obvious grain than standard fine-grain developers.

Water should be used as a stopbath.

Adox Adofix Fixer is a standard along with Adox Adoflo Wetting Agent for use after washing to eliminate any water spots.

The Brownie Camera Guy says:
What a great kit to start out with! The Paterson tank is the same tank I use. These tanks last for decades! I also use Adonal, among other developers. It is nearly foolproof and a perfect choice for the first-time developer. 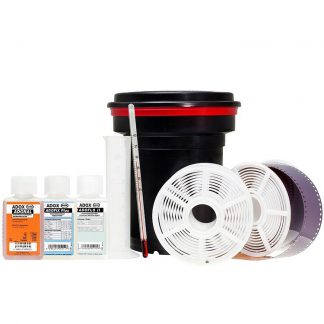