The Holga’s low-cost construction and simple meniscus lens often yields pictures that display vignetting, blur, light leaks, and other distortions. The camera’s limitations have brought it a cult following among some photographers, and Holga photos have won awards and competitions in art and news photography.

One of the most iconic toy cameras available, the Holga 120N is characterized by the unique image quality it is able to produce, along with its modest design and minimal controls. Featured here with a black finish, the Holga is best known for its standard-length 60mm f/8 plastic lens that produces a soft, dream-like aesthetic, which is further accentuated by the inherent vignetting and light leaks caused by the plastic body and simple construction. A choice between f/8 or f/11, or “cloudy” and “sunny”, aperture settings is available, along with 1/100 sec. or bulb shutter speed settings and a zone focus system for focusing as close as 3′ away. A tripod mount is incorporated into the base of the camera for stable long exposure shooting and a top hot shoe accepts optional electronic flashes. A camera designed to bring the fun back to photography, the Holga is a classic toy camera capable of making some remarkable, yet inherently lo-fi photographs.

The Holga 120N accepts 120 roll film and, with the included 6cm x 4.5cm insert, can produce your choice of 16 X 6cm x 4.5cm and 12 X 6cm x 6cm per roll. The film is manually advanced between shots using the top winding knob, with the frame progression checked using the rear red window.

The original Holga camera was designed by Lee Ting-mo in 1982. At the time, 120 roll film in black-and-white was the most widely available film in mainland China. The Holga was intended to provide an inexpensive mass-market camera for the Chinese working-class in order to record family portraits and events. However, the rapid adoption of the 35 mm film format, due to new foreign camera and film imports, virtually eliminated the consumer market for 120 roll film in China. Seeking new markets, the manufacturer sought to distribute the Holga outside of mainland China.

The Brownie Camera Guy says:
I have used Holga cameras since they first appeared in 1982. They are cheap, plastic and wonderful! If you are a fan of light leaks, no need to do anything beyond loading film and shooting. I use gaffing tape on all of my toy cameras to eliminate light leaks. 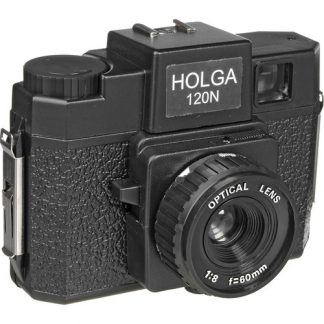