This is a roll of Fomapan 200 Creative Black & White 620 film respooled by hand using fresh film…on demand…after you order it.

The 3D printed spools used are designed by Chuck of BCG printed right here in the shop.

Fomapan 200 Creative 620 is a panchromatically sensitized, black and white negative ISO 200/24° film. Fomapan 200 is characterized by high resolution, wide exposure latitude and fine grain. It is the film of a new generation, making full use of the outstanding properties of hexagonal core/shell tabular silver-halide grains. The film features exellent resolving power and low granularity and is intended for use under normal or slightly unfavorable light conditions. Its wide exposure latitude allows exposures in the speed range from ISO 100/21° to 800/30° without change of development time.

Foma has been producing photo materials since 1921.

This 620 Roll Film is the one of the least expensive ISO 200 films available.

The Brownie Camera Guy says:
I regularly use Fomapan films in older cameras with inconsistent shutter speeds. It offers incredible forgiveness of exposure, which is really needed when shooting with unproven cameras. Processing is easy and very controllable. 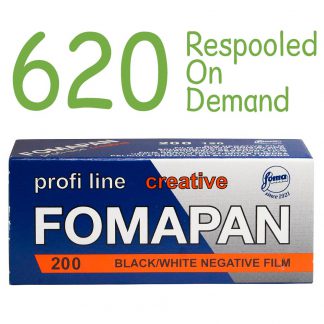