Dust off your 130 camera and use it again with a CamerHack 120 Rollfilm to 130 Rollfilm Adapter Kit.

130 film was introduced in 1916 and discontinued in 1961 and now you can use your 130 camera again. Camera modification is not needed and there’s no film jamming.

The plastic parts are nicely printed with a organic polymer, which is stronger than the 120 spool material itself!

The kit comes with four adapters, two for each spool in the camera. Three are the same and the one with a different hole is the “Key Adapter”. The Key Adapter is designed for the take-up spool so the winding mechanism of the camera will work as it was designed to. There are no modifications needed to the camera…simply put the adapters on, load the camera and shoot away!

How To Use
1: Load the the empty spool (take-up spool) with two adapters mounted at both ends, making sure that the Key Adapter corresponds to the camera’s film advance knob.
2: Mount the other two adapters on the unexposed film and put it in the camera.
3: Insert the paper leader into the take-up spool and roll up a little until it’s well inserted.

Any Camera That Uses 130 Rollfilm can be used with this kit and a roll of 120 film.

If you have any questions about compatibility, let me know.

Please Note that this kit requires an empty 120 spool for film take-up. If you need one, let me know when purchasing and I will include it for free!

The Brownie Camera Guy says:
What’s there not to like? These adapters have made it possible to use many of the cameras I have that were unusable without modifying, or destroying. These adapters are incredibly easy to use and are really well-made. BCG is the sole distributor of CamerHack adapters in The Netherlands! 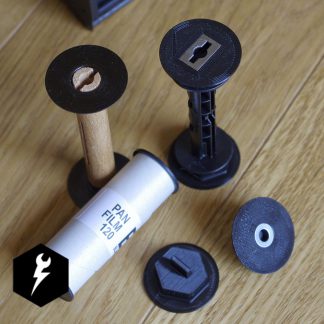