If you enjoy shooting with expired film, you will love this Europan 620 Black & White Roll Film!

Though this film is not guaranteed, I use it myself with surprising results…it’s almost too good for expired film. There is a slight overall fog to the film which does not make printing or scanning blotchy. The shadows and highlights retain remarkably good detail.

I have not been able to find any information about the makers and it does not have any manufacturer information on the edges of the processed film, however it does have numbers. Possibly made by a European company, like Agfa, and sold for rebranding.

After experimenting, I shoot it at 50 ASA, presoak for 2 minutes and process it in Rodinal 1:100 for 60 minutes with 30 seconds of agitation at the beginning and 3 inversions at the 30 minute mark. Finish with a water stop, neutral fix and photo-flo.

If you do not process this film yourself, please ask for the 620 spool to be returned…you then have it for respooling other 120->620 films for yourself.

When this film is gone, it will probably be gone forever!

The Brownie Camera Guy says:
I am not an artist who relies on chance. I like shooting expired film only when I can get a bunch of it, test it and determine what the film will produce. 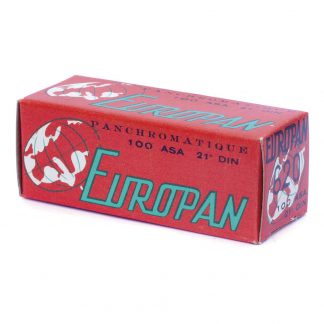