This is a roll of Bergger Pancro 620 film respooled by hand using fresh film…on demand…after you order it.

If you’re searching for a high-quality analog black and white film that delivers consistent results, then give Bergger Pancro 400 film a try, you will not be disappointed!

Bergger Pancro 400 is a two emulsion film , composed with silver bromide and silver iodide. They differ by the size of their grain. These properties allow a wide exposure latitude. Crystals are precipitated by double-jet process, under the control of a computer. The two emulsions are panchromatic, and are stabilized by high tech systems.

Bergger Pancro 400 Black & White Film is coated on a 100 microns PET base and includes an anti curling layer. It is designed with an undercoated anti-halation layer which clarifies during processing, and a anti-curling layer.

The Brownie Camera Guy says:
Bergger Pancro 400 film is among my favorite to respool and use in older 620 cameras. It offers remarkable forgiveness of exposure, which is really needed when shooting with old and unproven cameras. Shadow detail rivals ANY film I have ever used, especially when stopping development with water. Processing is easy and very controllable. I love this film! 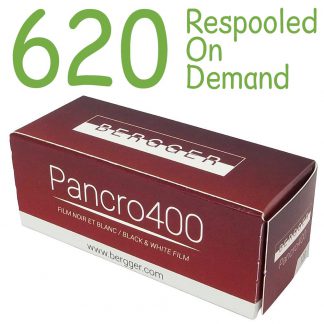